Syria and the Democratic People’s Republic of Korea (DPRK) have discussed means to boost bilateral relations and economic and industrial cooperation between the two countries.

That came during a meeting held Tuesdya between Minister of Industry Ziad Sabbagh and Chargé d’ affaires of DPRK Embassy in Damascus, Kim Hey Ryong.

Minister Sabbagh underscored the importance of working to strengthen joint cooperation between Syria and the DPRK to upgrade bilateral relations in the industrial field to be up to the level of the political relations in order to achieve the common benefit of the two friendly countries and peoples.
Golan Times 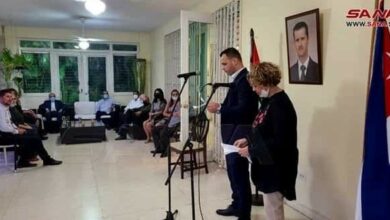 One person killed in rocket attack by armed groups on Mhardeh